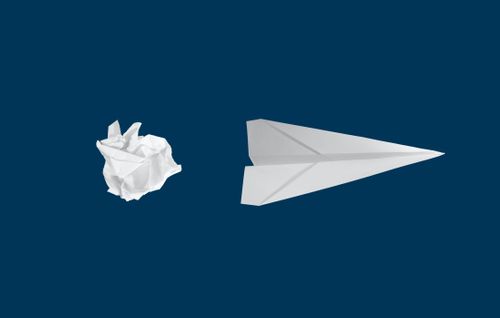 It's natural to try to learn and protect against previous failings - but when problems aren't immediately obvious, it can be easy to be misled...

If we look at news headlines, they are commonly designed to spark interest in the readers rather than be purely informative. Take success stories for instance, they are being communicated to the public through glory, and excitement. In this context, successful people are often being put on a pedestal as if they were born into greatness like a Disney rags-to-riches story.

Frankly, there are a lot of backstories and behind-the-scenes crucial moments that we are not made aware of. The focus on the rich and famous tends to always be about them overcoming the odds, or seemingly always being so great; We're never fully shown the true odds of their success.

If we compare the frequency of success and failure stories being conveyed to general TV audiences, we see that success stories vastly outweigh the coverage. Most of society is drawn to the happy endings, the 'it could be you' motivational stories- rather than the horror stories of those losing it all, becoming bankrupt, never getting past the first hurdle, or worse.

The obsession with success has many looking for shortcuts for overnight glory. Consequently, we turn to shortcuts to aid and speed up the process, which can lead to many complications.

Whilst many famous actors started as extras, most audiences have little to no interest about their lives before their fame. People are likely to focus on the survivors of the events without analyzing the sources and challenges that allow only a selective few to succeed whilst blocking many people to do so, despite having put the same efforts. The phenomena is known as the survivorship bias.

Becoming an actor is a highly competitive industry. When someone conquers this career and is rewarded with fame, it attracts heaps of attention and inspires people to follow their footsteps- the thinking being that if we mimic the methodology of the best, we can replicate their results. However, what is overlooked here is the thousands upon thousands of failed actors that followed similar practises but simply didn't get the same opportunity and success. As these people never got famous, their stories never got told, and the key insights on how to avoid mimicking their failures therefore not passed on.

Survivorship bias or survival bias is the logical error of concentrating on the people or things that made it past some selection process and overlooking those that did not, typically because of their lack of visibility.

During the WWII, a mathematician named Abraham Wald, was asked to become a member of America's Statistical Research Group (SRG) to help the military find the best way to protect their combat aircrafts from being shot down by the enemy.

Since the combat aircrafts were the study subject, the approach was to observe the state of the planes post-combat. Whilst not all of the aircrafts were able to make it back to the base, the military decided to use the survival planes that were impacted with bullet holes as an archetype to determine where further protective measures were needed.

Although this sounded sensible, Wald quickly spotted the fallacy behind focusing on the damaged areas on planes that returned:

The planes that made it back were fit for purpose, they survived. It was the planes that weren't able to return that were the issue, and therefore the focus should be on the areas that didn't get damaged: Because, if they had got damaged there then they'd have been destroyed!

The moral of the story reflects our potential to focus on favorable outcomes and what is visible to us whilst neglecting the failures.

Survivorship bias can appear in a number of ways throughout the business world, and we can be so blindly used to such flawed thinking that it is often difficult to spot.

For instance, one may argue that higher education does not make you successful using reasoning that very successful people like Bill Gates, Steve Jobs,  and Mark Zuckerberg are all college dropouts yet they are billionaires. Meanwhile, research shows that most successful business leaders hold a Bachelor's degree or higher but this isn't sensationalist.

To hold this belief suggests that we have fallen into the survivorship bias because we are only looking at a selected few exceptional cases that made it whilst failing to look at the majority cases.

We often associate hard work with success but what about the people who put the same amount of efforts but never made it big? Hard work plays vital role, but it does not ensure guaranteed victories. Surrounding environments, timing, and a whole host of unknown variables can have dramatic effects on whether or not someone (or something) succeeds - it could be as simple as being in the right place, at the right time.

Steve Jobs founded one of the top electronics companies to date, but his success stemmed from his childhood and the environment he was in. Jobs grew up in a neighbourhood with people that embraced electronics and innovation. His neighbour was also an electronics engineer at a well-known technology company, who taught him all about electronics and how to build them.

Whilst there are many other tech savvy people who do not reach such lofty heights, it is not because they haven't worked hard enough but moreso that not everyone gets the ideal circumstances to pave (or support) their route to success like Jobs did.

Hence, in order for businesses to make impactful decisions whether it be launching a new product or building on an existing product, it is important that they properly use meaningful, representative data and sources to prevent survivorship bias.

When decision making, be careful not to be drawn to incomplete datasets. There may be forgivable reasoning for gaining tunnel vision directed towards some hugely exceptional cases - but take the time to analyse all variables and additional data when available. Often there may be missing data to seek out to avoid falling to biased thinking.

Whilst Einstien said doing the same thing and expecting different results is a sign of madness, this doesn't apply to brands and businesses - because times change, trends change, audiences change, tech changes, teams change, perceptions change, values change, and... well, you get the picture.

So don't just try and replicate an exceptional case and expect the same result.

Don't be the next Apple, be the first you.