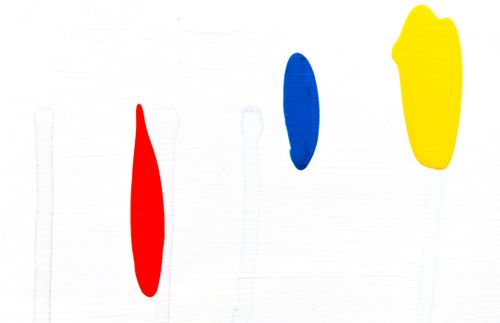 On the topic of minimalism in design, we look at brand synergy and how the zeitgeist of design effects cognitive loads and expectations.

As we continue our deep dive into the minimalistic design trends, it'd be remiss not to focus on the recent rebranding of Google's suite.

Firstly, Google has been part of the growing tend to simplify design and have bold type driven identities. The clean type-driven logos above display instant professionalism and match their bold conquering status in respective markets.

Going beyond the logo, associated with Google is a cascading selection of apps for every day usage such as maps, documents, spreadsheets, e-mails, downloads, photos, and beyond.

The internet giant originally started out by creating individual platforms and applications to solve specific problems, and as such individual identities were made logically to showcase their solutions. Over time, Google has blurred the dividing lines between their offerings, and made their suite feel much more of a single package.

According to Javier Soltero, vice president and general manager of Google Workplace, the unified identity of these different tools is emblematic of the increased synergy between the apps themselves.

Previously, each icon seemed to give a fairly sensible representation of the app function. An envelope for a mail tool, a document to represent the documents tool... simple.

Now, with Google being so widely established, the rebrand represents the final walls between app divisions being demolished. The uniform design across all applications is plain to see, although many critics claim they've made their designs far too bland.

A well-oiled corporate identity that ties together a brand across a vast array of software (or services/products) can work to your advantage. For Google, anything new they release automatically has credibility due to their previous great work and outstanding reputation. By ensuring their new features follow their branding style, customers will quickly and automatically make the connections of quality, assurance, and professionalism.

However, if you have a product or a service with a different essence, personality, emotional and functional benefits, then often your brand deserves it's own identity. Synergy only works when the connected components truly harmonize.

With Google's decision to adopt such a minimalist style, there's a real risk that their identity could either get lost or be confused amongst copycats or similar trending brand styles. Minimalism may be a desirable aesthetic, but be careful you don't lose the soul from your creations.

Continuing from the above train of thought, we approach a key consideration: Cognitive Load.

Following trend setters, especially industry giants, is often advisable. Essentially you piggyback on the thinking and risk-taking of the best, and ride the wave of success alongside them or at least gain some sort of 'safety in numbers' for any gambles made. So with that in mind, when Google decides to approach branding in a particular way, it's not surprising that you may end up with a database of apps that look like the following:

Whilst the vibrant flat colours may be easy on the eye, suddenly there becomes a blur in identity. With such similar styles, our ability to instantly recognise and decipher information can be lost; more time is required to find the app you need.

Cognitive load is the amount of mental effort it takes to do a task. There are three sources of cognitive load for every task.

One is intrinsic load—the amount of mental involved in performing the task. For instance, in working a math problem you must do a number of mathematical procedures. This effort is intrinsic to the task itself.

A second source is called germane load, which is the mental effort involved in deep learning and trying to understand the task or material. If I read an unfamiliar text much of my effort should be focused on trying to make sense out of it.

A third source of load comes from the immediate environment, especially the instructional context, and is extraneous to learning the subject or doing the task at hand. Disorganized instruction, for example, contributes extraneous load to a task. Every learning situation involves a combination of these three sources of mental effort.

Unfortunately, our capacity to process information is seriously limited. People can manipulate only a few pieces of information at one time. Students are often asked to take in large amounts of new information that exceed their processing capacity, resulting in cognitive overload and poor learning.

Perhaps that is the biggest danger with a trend; suddenly brands feel soulless and simply part of the same vague noise. Basically, a group of five hundred people all dressed uniquely suddenly makes no one feel unique—imagine how your brand would look adopting the exact same style, palette and general trends as used in the above example?

There are strong arguments towards joining a popular design trend, so consider what suits you must.

Association with the best. If you look like the big brands, you'll unconsciously convince many that you match their quality and output.

Lost in the noise. If there's 20 brands, and 18 of them look roughly the same, it's the remaining two most likely to turn heads.

Finally, as we started the discussion looking at how Google linked together their suite with a uniform, minimal style, and then observed how other brands seemed to blend with their aesthetic, we pose the question of purpose.

If you intend to be part of a design trend, ask if your brand matches the mood, the essence, the zeitgeist of the 'phase'.  If you match what all the leading brands are pioneering, you can seriously benefit.

However, if you are mismatched and don't reach expected standards (due to style synergy), then you risk seriously disappointing potential customers and leading people astray.