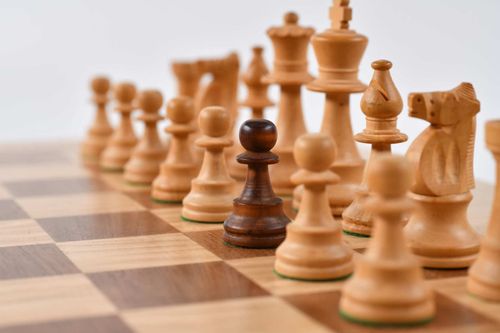 How Chess Helps Us to Make Tech Decisions.

There are certain habits in chess that encourage self improvement, whatever industry you are in.

Some of us in Mäd are chess enthusiasts yet the point of this article is not to promote the game. There are certain habits in chess that encourage you to be better, in whatever industry you are in. The habit of foresight, forward-planning is central to success both in chess and business.

Bill Gates once had an exhibition match with the world’s best chess player, Magnus Carlsen.

Carlsen beat Gates in 9 moves. It took him under a minute and a half.

Magnus Carlsen is worth $8 million, Bill Gates is worth $150 billion. Reminding us that good chess strategy alone doesn't translate to ultimate business prowess.

Perhaps also, it is naive to measure success purely in dollar values as often our goals aren't financial. Carlsen arguably has completed and maintained his life goal of being the world's best chess player, whilst the incredibly accomplish Gates has an awe-inspiring on-going to-do list.

Thiel started PayPal, and now he runs an investment group, Clarium Capital. He was also Facebook’s first external investor, giving him incredible kudos as a forward thinker. He champions creative thought strategies in his book, Zero to One, available to borrow from our library for any curious clients.

He’s well-known for his lectures in Stanford, whereby he often talks about chess and using it as examples of how to help businesses. We've taken direct inspiration for this insight from his ideas.

By all means, not all chess players end up in Wall Street running successful startups. The more business minded professionals give up chess instead of becoming grandmasters, and focus their intelligence on financial wins.

Benefits of Chess for Your Business.

Everything we do in Mäd, we have to do step by step. There are rules in chess that are not strictly laws, but they are rules for a reason. Your rook shouldn’t be out too early, they’re the best when some of the verticals are free. You should try to control the centre. Don’t block your own pieces.

Know your sequences: Chess has three acts, just like a drama: the opening, the middle and the endgame.

Every move that your user makes matters.

The opening: what comes after the splash screen? Is it going to be your brand, your value proposition? That matters. Do you need a login screen before you convert your user?

Customers always think step by step, so at any given time you need to be at least two or three moves ahead of them. UI/UX has best practices. Same with chess. Openings are known for good reasons. English, Sicilian, King’s Pawn, many players follow these openings because they are proven advantageous.

Just as in chess we train ourselves to think sequentially. Step by step.

Compared to chess, actually building a website, or mobile app is far more complex. There are more variables, there are more players. There are infinite amount of steps, but the board is bigger, much bigger.

We ask questions firstly. What features do we need to develop first? Do we need a login? Why? Should Create Order come after Order History? What if there’s no connection?
No stone is left unturned as we think about all possibilities and variables.
Every move matters.

We can then look at it on a higher level:

How are you going to convert your users? What’s your target?

“To succeed you must study the endgame before anything else." ~Capablanca (Another Chess Grandmaster)

Always start with the endgame. What are your business objectives? What does success look like to you? This is the one question that we always ask our clients and prospects.

And quite a few struggle with this. Without the endgame in mind, the openings don’t even matter.

In chess, time is a resource, especially in blitz games. That is the same in any business. We can see this in our scrum teams. Every single task is broken down in hours. We plan what we need to develop two weeks in advance, that’s the sprint planning. We know the total number of hours available to us, and then we work backwards.

Each chess piece has a different value. The pawn is valued at one point, the knight and bishop at 3 points, the queen at 10. The biggest irony is that the King has no value, because he is the last piece; You cannot trade your king for any piece. But, in the end, the value is very subjective.

It is subjective because we don’t know if the players with more points will win the game. More often than not, they do, but that can't be absolute. The color of the bishop in the game matters. The knight and the bishop are both worth three points each, but depending on the type of game you play, they may be worth more. If you are playing with a lot of open spaces, then you’d be foolish to sacrifice your bishop, because they cover more space. If the game is congested, your knight will be incredibly useful. So in this situation, it’d be the knight protected at most opportunities.

At one of our Mäd Monday events, Mike Ivanov from Pay&Go talked about how to prioritize features to develop. Whether the feature is going to be profitable, and whether the team has the capability to create the feature in the given amount of time.

There are always unlimited demands, unlimited things to try, unlimited wants, features, but resources are always going to be limited. There are only so many hours in the day, and so much you can focus your attention on. So prioritization matters, but how do we define that?

Every organization should have a way of measuring the value of each task. Is it going to be an important feature that everybody uses? And how will you decide on that?

A typical example is business value versus complexity quadrant. Even this one is problematic. How do you define business value? Is it going to depend on the size of your users? The expected revenue from users? Do you even know the size of the population? How do you measure complexity? Is it an estimation by development time?

There are other ways where you can measure value. Last time Mike Ivanov talked about weighted scoring, so those involved in the project give a value between 1-10 on the complexity and the value. This is still quite subjective, in some respects, most of them are, but at least with the law of averages, and the wisdom of crowds, you can create a more objective result.

Correctly judging value is often difficult, whether you’re paying for a ming vase, stocks, or developing a feature. We follow a principle to reduce uncertainty in assigning value: always go back to your user.

And, whatever you do, always have a plan.

“A good intermediate lesson in chess is that even a bad plan is better than no plan at all. Having no plan is chaotic. And yet people default to no plan."
- Peter Thiel

Making a plan is difficult, but having some form of a plan is better than having no plan at all. This is very similar to thinking pragmatically and, at the same time, there are further questions to ask for the bigger picture.

What are the risks? How fast can you pivot?

In chess, you might be planning an attack on the king side, with a bishop, but if your opponent sees that coming, then you need to change the plan altogether. Either you apply more pressure, with more resources, or you change the direction completely. Perhaps you attack from the other side of the board, use different pieces.

Planning a mobile app end to end is also more complex than planning an attack in chess. Many questions and scenarios can arise at any given time due to the large number of variables.

For example: What comes first? Once we’ve signed the proposal, how do we lay everything out? Who’s responsible and accountable for each step of the process?

We make no apology for sending extremely long proposals, because we go through the minute details.

Here are other things we learned from playing chess.

Thinking about Chess the wrong way.

There is a danger to using chess as business analogy. One analogy that we don’t use is that of chess as a narrative for an organization. We can’t sacrifice anyone in the team, no one has a pawn role.

It’s dehumanizing to view people as chess pieces. Everybody plays an important role. We wouldn't join the analogy that the board members are the King, or the CEO is the queen, as it’s a poor comparison for the modern times. We find substituting people as chess pieces to be limiting, and very demeaning.

Indeed, there are dangers of thinking too far in advance. We’re running businesses, we don’t have the luxury of time. Every business is a lightning chess game. Your information is limited by the time available to you, but in all cases, we have to minimize errors- always.

And we think the biggest difference is that chess, it’s an individual game.

Business, technology, you can’t do alone.

You need a team for that.

And a great one at that.